Baghdad, 2003. In an effort to establish some semblance of order in the war-torn city, Florida cop-turned-military consultant Chris Henry has been assigned to train cadets in law enforcement. But good intentions are not immune to the chaos found in the post-9/11 Middle East. When one of Henry’s trainees is found dead, he’s forced to ally himself with Nassir, the last policeman in Baghdad, to unravel a bloody mystery. While Henry and Nassir search for answers, forces in the shadows are pulling strings that these men don’t even know they’re tied to. Collects issues #1-6 of the acclaimed series. In volume 2: In these chapters from THE SHERIFF OF BABYLON #7-12, things are heating up in Baghdad. What started as the search for one man’s killer has turned into something much deeper, and everyone lost something in the violence that followed. Now Nassir is in the hands of the men who may have been responsible for all of it. What they want from him is unclear, but it’s a payment they intend to take in blood. Deals with the devil rarely go right, but in Baghdad, the wrong deal could get lots of people killed… 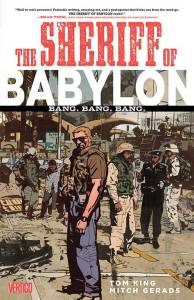